A mythical look at the meta-narratives of our world

The Wound and the Bottle

A few days ago I was struck by a deep sadness. I know that feeling, it is centred around the heart, it feels like a deep grief of being disconnected with life. True life. A disconnection within the self, a rift, a gap, a lack. A lack of wholeness. It’s a terrible feeling and often kickstarts mechanisms in the psyche which makes me want to drink insane amounts of coffee, play computer games, watch meaningless Youtube-videos, scroll my Facebook feed etc. etc. Just to avoid the pain.

This time, though, the underlying sorrow was too intense. Escapistic strategies wouldn’t work. From experience I know that pain can be a teacher if you let it. So I tried to sink into it, to look for the origin of the wound. An image appeared in my mind, a specific tree in a nearby park, a gentle suggestion to go there and see. “Why?” I asked myself. “Just go” was the reply.

So I did. I bought a cup of coffee at my local café and walked for ten minutes until I arrived at the edge of the park. The image I had in my mind’s eye was of a tree in a certain part of the park, so I walked there and immediately noticed a chestnut tree. It looked a bit forlorn to me, someone had even tagged it with a black Anarchy symbol. My instincts told me this was the tree, but then I noticed a beautiful maple just beyond it. “No, this is the one” I told myself and walked past the chestnut. As I did, however, I got the nagging feeling that I was wrong and that my first instincts were right. The chestnut had to be the tree. So I turned and walked back to it. 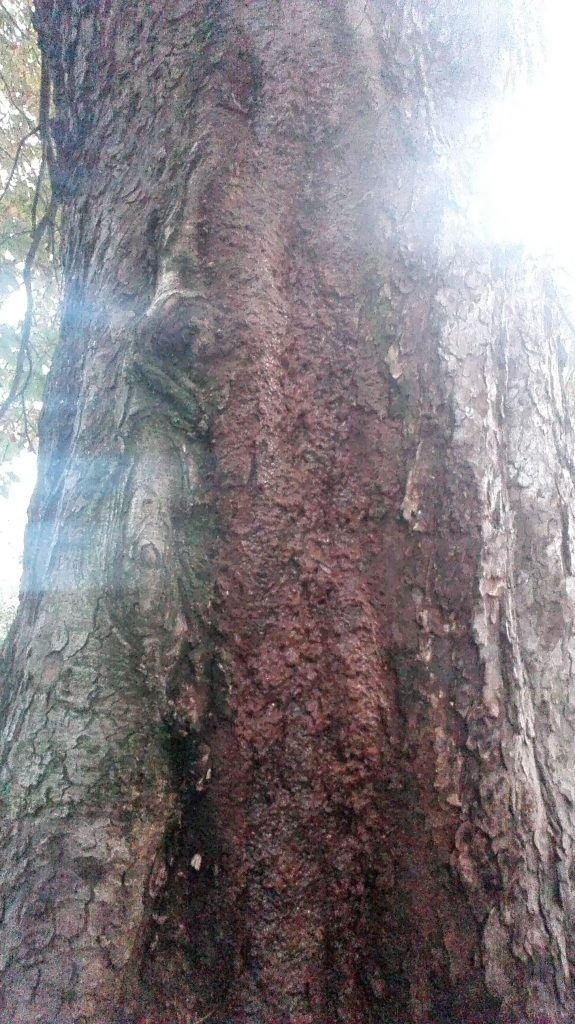 And as I did, I noticed something. On this side of the tree I could clearly see what looked like a gaping wound, a sore filled with brown goo that ended in a tapering point 2 meters or so above the ground. I walked right up to the trunk, feeling suddenly an outporing of sympathy for this tree. What had happened? Was it sick? Looking down towards the ground, where what I perceived as being a wound was at its largest, I saw a foreign object close to the trunk, covered in the dark brown pus-like substance. It was circular and clearly man-made. A big plastic cork? Did someone intentionally poison this tree?

Wiping away the goo, it quickly became clear that it wasn’t plastic at all, it was transparent glass. It looked like the bottom of a Coca Cola-bottle, only a few inches of it visible above the clayey ground. It was impossible to move and the glass was rubbing against the bark. I had to get it out.

So I started to dig. With my bare hands. Clay, stones, sore fingernails and suddenly a feeling of intense meaning. Of purpose. I kept on for half an hour until the clay became so compact that it was hard to go on without a tool. I met a friend who suggested a screwdriver could do the trick. It did. I returned with my improvised digging utensil and kept on for half an hour more until I managed to dislodge what was in fact a Cola bottle. In its wake I could see a circular hole in the tree’s underground roots, the imprint of the bottle’s tip. Long chunks of rotten wood was inside the uncracked bottle, like the remains of a severely unsuccesful attempt at putting a ship in there.

g the hole I’d made with soil and clay, I hoped that what I’d done would be of some benefit to the tree. Walking home, with clay-covered hands clutching the screwdriver and the offending bottle, my thoughts wandered to the nature of wounds, both personal and civilizational. And to a central character in Western mythology, the Fisher King.

In one version of the tale, a young man named Amfortas was riding his horse into the world. He was a bright and true Christian knight, carrying the banner of LOVE. Then he chanced upon another knight, a pagan. An infidel returning from the Holy Land. Spurred on by duty to his faith, the Christian knight lowered his banner to attack the non-believer. In the end he managed to kill his opponent and cut off his head, but not without receiving a grievous wound of his own; the other’s spear had pierced his testicles, making him both lame and impotent (Amfortas, by the way, means “without power“). Thus cut off from the lower half of his body, the young man became a recluse and retired to the castle of his father, taking over his duties after the old man’s death.

This castle was The Grail Castle, only reachable for the pure of heart. The young man became its Fisher King. Every day he would sit in his boat in the lake, patiently fishing, waiting. On his search for The Holy Grail, the knight Parsifal (‘Pierce-through-the-Heart’ or ‘Right-through-the-Middle’ according to different interpretations) comes upon the Grail Castle in the innocence of his youth and is served a banquet by the Fisher King, noticing the lameness and the still-dripping wound, but failing to ask the mystical question that would earn him the Grail – “Whom does the Grail serve?” (or in another version – “Sir, why do you suffer?”). Instead he remains silent and upon waking the next morning the castle is gone, and all he can see is empty ruins.

Parsifal returns in his middle age, wiser and matured, accompanied by a Muslim knight whom he has befriended. He asks the pertinent question, receives the Grail and also brings the cure for Amfortas’ wound. The spear that hurt him in the first place. Only by touching the tip of the spear to the testicles of The Fisher King can wholeness be restored. And since the King is a metaphor for the land which he rules, the land is healed as well.

The price of civilization and the masculine wound

We are cut off from part of our nature. To become civilized and to grow we had to make a sacrifice. We, like Amfortas, killed and threw away the pagan knight, or to put it another way – our instinctual side, to become fully conscious. But in so doing, we were terribly hurt. This is the modern wound in the male side of our nature. There is a loss of feeling/intuition, of connecting, of a deeper understanding. There is a rift, a sickness, a wound. We’ve been suffering the results of it for a long, long time. There is a strong sense of male powerlessness in the world, which is expressed (coarsely speaking) in two ways. By despair/defeatism and agressive violence/patriarchal structures/repression as a means to feel power. The latter directed towards self, women, other races, nations, cultures, ideologies, religions and even nature itself. Neither way represent a balanced masculinity.

Cut off from an integral understanding of our deepest nature, we often fail to appreciate and see the nature around us, and to understand how it mirrors us. As I took the glass bottle home to clean it, I wondered how long it had been there, and also thought about the fact that I would never have noticed the wound or the bottle, if I hadn’t approached my own wound through the medium of my own intuitive feelings.

I once heard a colleague tell what I believe to be a Finnish-Ugric tale of the origin of pain. Severely paraphrased from memory, it goes like this: Three men, one blind, one crippled, one lame collaborated to shoot an arrow. The blind one aimed, the cripple pulled the string, and the lame let it go. The arrow bounced off the World Tree, hitting Man, creating an uncureable wound and introducing Pain into the world. The only way to cure it, is to sing forth a bull with thousand horns and let it into your wound.

We need a thousand-horned bull. We need a spear. We need to heal. The bottle now stands clean and shining beside my desk as a reminder, pieces of dead wood still left inside. Maybe what once ripped us apart can still make us whole again.

2 thoughts on “The Wound and the Bottle”